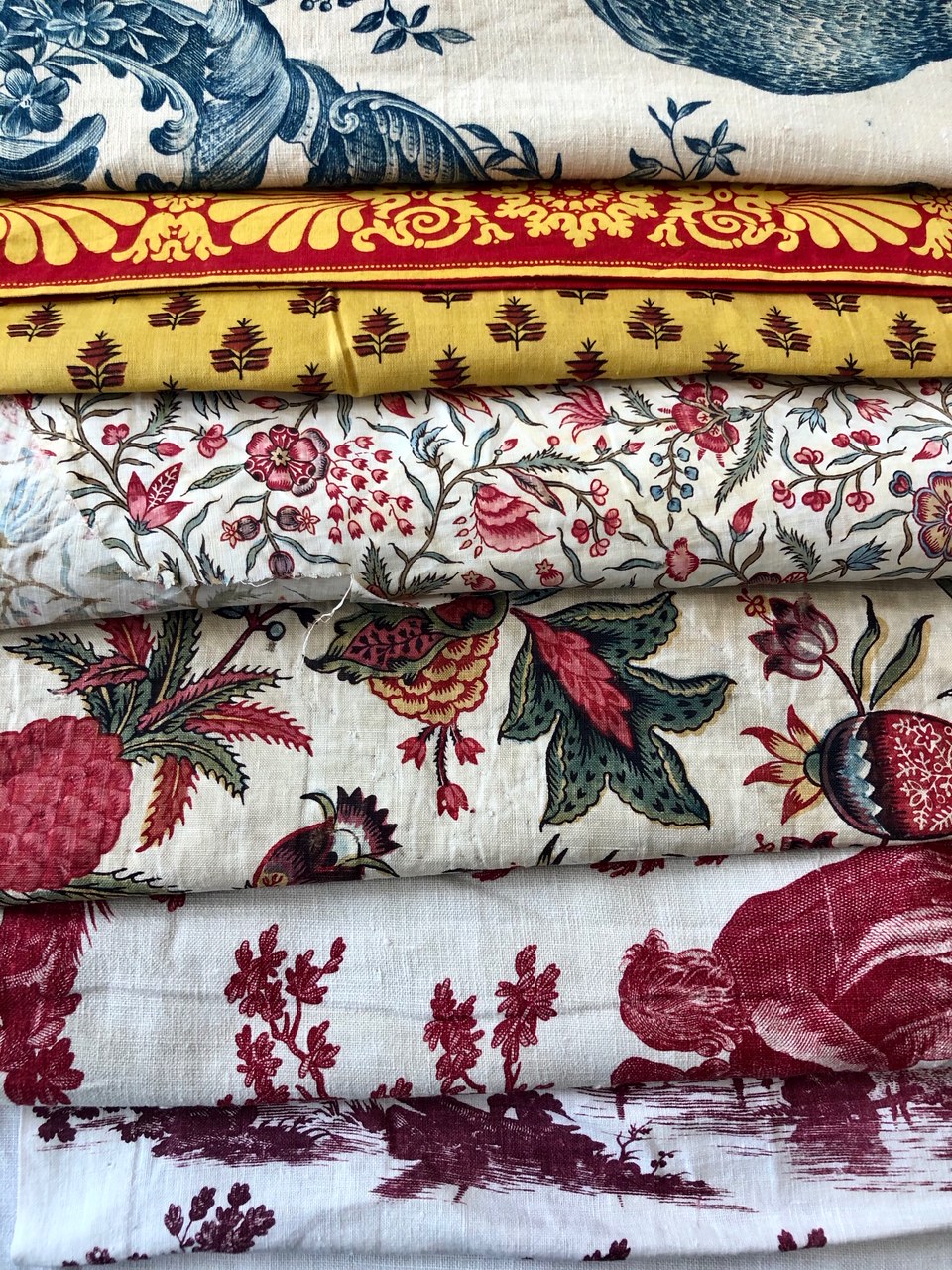 In her ongoing series for The Edit, textiles expert Jill Lasersohn takes us on a deep dive into the fascinating history behind one of her all-time favorite fabrics—Toile de Jouy.

Jill Lasersohn has loved pretty fabric since she was a young girl. In her twenties when she began to collect historical textiles, that love turned into “a delightful addiction.” Over the past two decades, she has combed French flea markets, befriended textile experts, and cultivated relationships with dealers to build her private collection of around 3,000 documented European pieces from the 1400s through the early 1900s. This collection includes silk damasks and brocades, embroidery, velvets, and printed textiles.

While Lasersohn doesn’t want to be labeled “the Toile Lady,” she has developed something of an expertise in these beautiful printed fabrics that rose to prominence in France and England starting in the mid-1700s. Her collection includes over 500 pieces of toile, around half of which were manufactured by the original Oberkampf factory that gave this pattern its name, Toile de Jouy. With a new toile collection available in collaboration with Schumacher, Lasersohn goes back in time with writer Allison McNearney to explain how Toile de Jouy became so special.

Do you remember buying your first piece of toile?

I sure do. I was in my twenties working for a magazine in New York City, and I only had enough money to pay my rent and buy subway tokens and food. But, for my birthday, my now-husband told me to go buy some textiles. I went to the studio of Cora Ginsberg, who is the quintessential expert in historical textiles, and I bought an 18th-century piece of Toile du Jouy known as The Miller and the Mule. It was designed by the famous designer Huet, who was sort of like the Rembrandt of the toiles, and it came from the original Oberkampf factory in Jouy, France. I brought it home, stared at it, and researched it. I thought, my God, this has survived revolutions and fires. It was cut up and it was mended and it is beautiful. That piece started this collecting insanity.

Let’s go back to the earliest days of Toile de Jouy. Can you tell me a little bit about the history of the Oberkampf factory?

Christophe Oberkampf was Swiss-German, and his father was a professional dyer. He heard about this new fabric printing technique in Ireland developed by Frances Nixon, so he emigrated there for an apprenticeship in the 1750s. He basically stole or borrowed the technique, and then set up a business in Jouy, France.

Oberkampf was brilliant. Jouy is directly on the route between Versailles and Paris. When Louis XVI came to power, he insisted that the courtesans stay in Versailles, so as they traveled back and forth, everyone would go past Oberkampf’s factory. It was on a beautiful river that apparently had the cleanest water, which is important when you’re producing printed cottons. Oberkampf would lay the textiles out on the grass to dry, and the wealthy would see these beautiful fabrics as they were going past. They had to have them. What was also very smart of him was that, well ahead of any labor movement, he was very good to his workers. The best of the best of the printers and engravers got word of this, and they begged him to work there.

Can you tell me more about the designs on Toile de Jouy fabric?

I think of this pattern almost like reading a newspaper, because it really is a sign of the times. During the Rococo period, you have the pastoral toiles — ladies on swings, women in beautiful gowns having a picnic, or children running around with a little lamb. The neoclassical ones came out towards the end of Marie Antoinette’s days, and they featured things like allegorical figures, little cherubs with wings, and Pompeiian landscapes, which were all the rage at the time. Then, there were the architectural toiles when everyone started to travel more and make their grand tours. Those fabric were like souvenirs. There are the patriotic toiles, which commemorated events like America’s War of Independence and the falling of the Bastille. The exotic toiles, like Asian chinoiserie, are highly collectible because they didn’t make that many. And finally there are the beautiful florals, which the English mostly made with these almost lifelike large, lush, branches and leaves and flowers and butterflies and birds. They just had a whole different style.

An assortment of architectural toile fabrics.

A detail of an architectural toile fabric featuring neoclassical buildings.

A close-up of a scene in a literary-inspired toile.

Today, toile is most often associated with home decor. Was that the case when it was originally popularized or was it used mostly for clothing back then?

The other type of toile was called fleuries or bonne herbes, and they were small printed flowers. These were primarily used for clothing, and it’s how Oberkampf made most of his money. Toile gowns were more valuable than silk, and they were popular because they weren’t as uncomfortable as silk when you would sweat and you could more easily wash them. I have a collection of these fleuries, which are pretty hard to find today. They were worn as clothing, which wears out more and is cut up into rags or quilts.

A dress from 1785 crafted out of a fleuries toile.Courtesy of the Musee Oberkampf

An assortment of floral toiles.

Is it true that Marie Antoinette loved toile?

Marie Antoinette went bananas for it. She was very much influenced by Rousseau and the pastoral. Two or three times she took her children on a playdate to Monsieur Oberkampf’s factory so they could see how the fabrics were made and printed, because it was still quite a new thing. The kids got their hands quite literally dirty with dye. When she brought the children back to the palace, the superintendent was furious because she couldn’t get the children’s hands clean. Everyone else laughed about it.

This pattern was made in France and England, but it is also closely associated with colonial America. How did that happen?

The colonies were settled mostly by British people at this point. In England, there were taxes on cotton because it was sort of killing the wool industry, so they would export the printed cottons and toiles to Virginia, Philadelphia, and Boston. In these American cities, they have as much if not more toile and printed cottons than they did in England. So when you think about women walking around colonial Williamsburg in toile, they really were walking around colonial Williamsburg in toile.

When Ben Franklin was in England, he was buying what they called curious copperplate print. The name Toile de Jouy was only coined in this century. Franklin sent some of the fabric back to his wife for their bedroom, but apparently, he didn’t send enough yardage. The traditional style was to cover every surface in it — the bed, the walls, the chair. Thomas Jefferson also had toile at Monticello, and he describes in some of his letters about having a shipment of printed copperplate sent to the States. And then, of course, you look at Jacqueline Onassis in the White House. She decorated many of the rooms in toile. I’m just crazy for toile; it’s really a timeless fabric.

An array of Pompeiian-inspired toiles.
2 /

You’ve been pursuing this passion project for decades. What does it feel like to see some of the pieces from your private collection come alive again in the new Schumacher collection?

I burst into tears when Schumacher sent me the first sample cuttings about three months ago. I was so proud. A lot of what I do is to preserve the history because it really ticks me off when interior designers cut up these 17th-and 18th-century fabrics and use them for pillows or dog beds. Seeing the collection was a moment when I just thought, Oh, my god, I did it!

This interview has been edited and condensed for clarity. 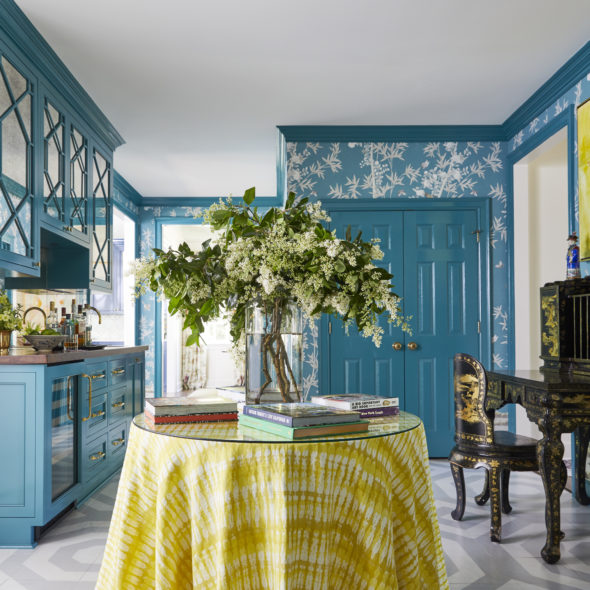 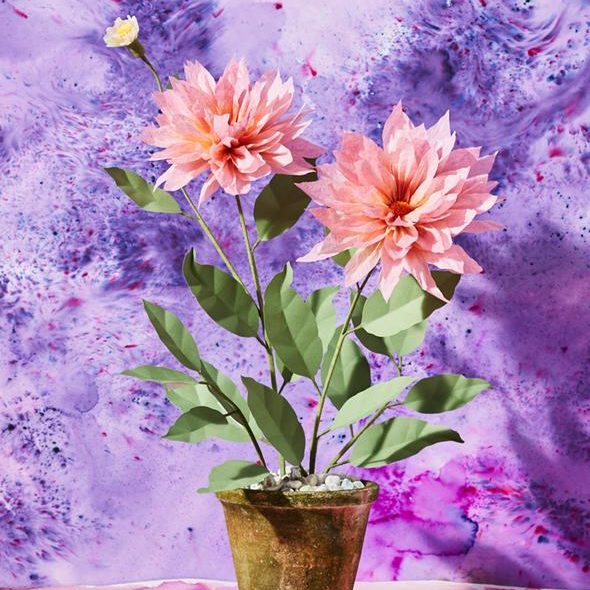 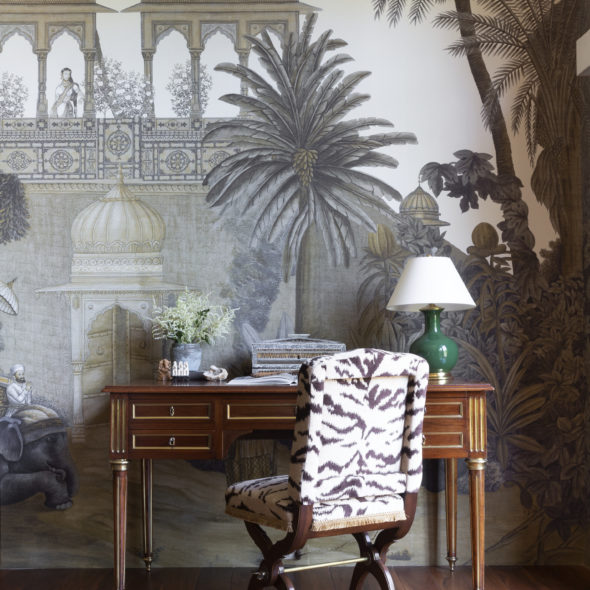 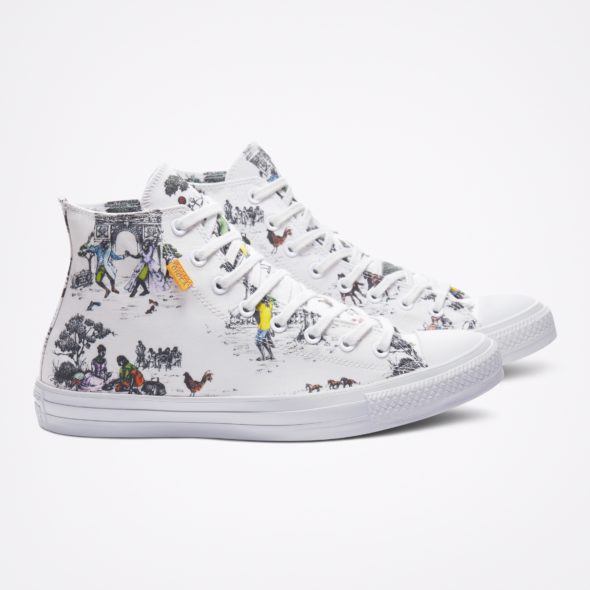