Meet the Makers Behind This Illuminating Sconce

The founders of Workstead celebrate their firm’s 10th anniversary with a lighting collaboration with Schumacher that displays their deepening interest in softness and play. 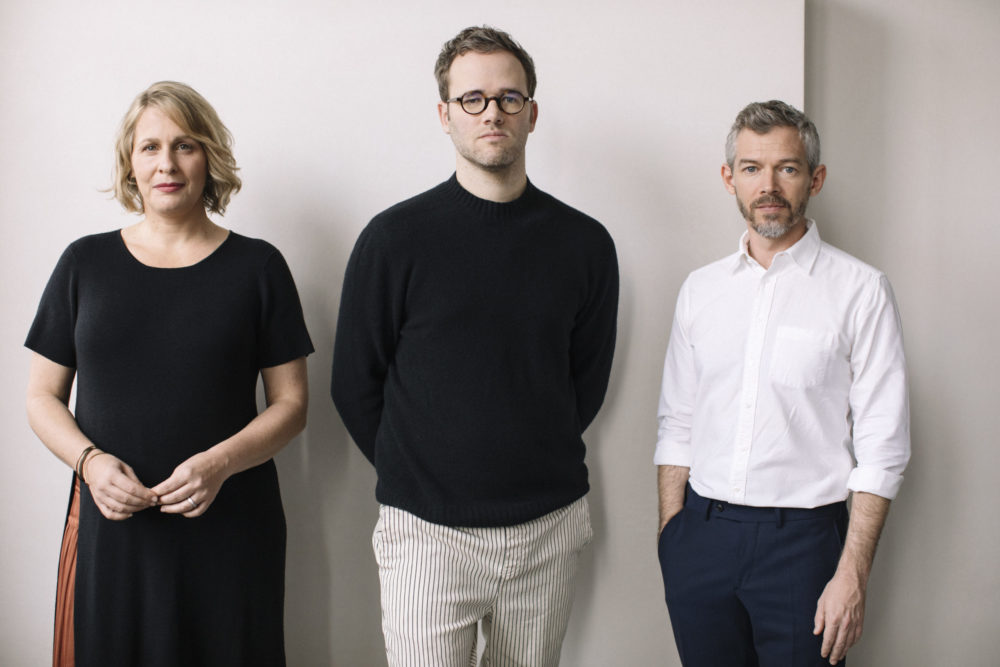 Workstead’s founders Stefanie Brechbuehler, Robert Highsmith, and Ryan Mahoney.Rich Gilligan
Ten years ago, before they were Workstead, before they had designed The Wythe Hotel in Brooklyn or The Dewberry in Charleston, South Carolina, or launched their wildly popular lighting collection, co-founders Stefanie Brechbuehler and Robert Highsmith were hired to re-do a tiny kitchen in New York’s East Village. “I have to laugh,” Brechbuehler says, “We had recently graduated [from the masters in architecture program at The Rhode Island School of Design], we were conceptual thinkers, and we thought that you designed everything, because that’s what you did at school. We didn’t think that you’d spec a kitchen, or work with a kitchen designer. So we designed the kitchen from scratch, starting with re-inventing the kitchen cabinet door and how you open it.”

In this living room in a Charleston home Workstead created a modern space that perfectly complements the historic architecture.Courtesy of Workstead
While that painstaking approach might have slowed that first project, the same thoughtful attention to detail continues to inform their work to great effect. With studios in Hudson and Brooklyn, Workstead creates chic but welcoming lighting and residential and commercial spaces built to last. Warm, modern, and forever solid in feel, they highlight an old-fashioned dedication to quality construction and materials and tactile, analog pleasures.

The living room of a guest suite at The Dewberry in Charleston, SC.Courtesy of The Dewberry
The Dewberry hotel is a stellar example of the Workstead philosophy. Housed in a former federal government office building built in downtown Charleston in the 1960s and badly damaged in 1999’s Hurricane Floyd, the once-derelict property was transformed into an elegant yet approachable space that joins mid-century design with traditional southern materials, and showcases art and craftsmanship by local fabricators, artists, and designers.

The Shaded Block sconce is covered in Schumacher's Floreana fabric.

With a tug on the brass pull, Floreana comes to life.
To mark their 10th anniversary, the firm has been launching one new product or small collection monthly. This celebratory push includes a limited edition of lightboxes made using fabric from Schumacher’s Classics collection to wrap three bold architectural forms. “Our goal was to create a line that really pushed the wall sconce typology in a new direction,” says Highsmith. They chose three natural themes—woodland, garden, and rolling hills—to mirror the sconces’ distinct geometrical shapes. So peaked Gable is clad in Rolling Hills, Vault’s curve—suggestive of an allée of trees—is dressed in Woodland Silhouette, and rectangular Block, covered in Floreana, recalls an English garden.

The triangular shape of Gable plays off the rounded peaks of the Rolling Hills pattern.
As part of their recent re-do of their historic Salisbury, Connecticut home, Brechbuehler and Highsmith took this experiment one step further. Using the same Woodland Silhouette pattern in Steel found on the Shaded Vault sconce, they covered the walls of their dining room in a custom-colored sisal and the table and chairs in linen, turning the space into an “immersive environment” that invites interaction. When the light is turned on, “the limited number of people who’ve come in here just want to touch the walls and feel the texture of the grass cloth and then pull the pull on the light fixture,” says Highsmith.

In Stephanie and Robert’s Connecticut dining room, the charming flora and fauna pattern of Schumacher‘s Woodland Silhouette gains new energy when illuminated on the Shaded Vault sconce. The walls are sheathed in a custom-colored sisal of the same pattern. Styled by Mieke ten Have.Matthew Johnson
The firm has long been committed to designing products that people want to touch, but now that they’re parents (to 21-month-old twin girls), they’re exploring new avenues of design. “Creating a home for our own family has softened us,” says Highsmith. “We are finding ourselves becoming a little bit more whimsical and playful and interested in exploring pattern and color.”

Parts of the couple’s Connecticut home date to the 18th century, and the Glastonbury chairs in the dining rom are 19th century, but Workstead made it feel entirely modern and very striking by bathing the room entirely in Schumacher’s Woodland Silhouette and adding their own Signal Globe fixture.Matthew Johnson
Workstead’s fundamental commitment to celebrating the everyday and building things that last remains. “The house that we live in now—part of it is from the 1700’s and part of it is from the 1800’s,” says Brechbuehler. “We understand that we are just passing through but the house is going to stand after we leave. And we hope that our interiors and our light fixtures will do the same. Maybe that’s a lofty dream, but that’s certainly what we’re hoping for.”

The Shaded Block in Floreana

The Shaded Gable in Rolling Hills

The Shaded Vault in Woodland Silhouette